Architecture of a Batch Processing Subsystem

I was recently asked for a proposal for a batch processing subsystem. The requirements were the following:

In the following, I describe two approaches to the problem, using the Amazon Web Services cloud platform. Using AWS would limit capital expenditures on the beefy and costly hardware that would be necessary to process tens of terabytes.

First, I should mention that AWS announced at the last re:invent conference three new services that are directly relevant to the problem at hand:

In the coming months, it should be possible to use these services to implement batch processing without need to provision, monitor, or maintain clusters of servers.

In the meanwhile, I will describe a more traditional batch processing system using AWS S3, AWS EMR, a scheduler running in a container, notifications via SNS, CloudWatch monitoring, and so forth. The architecture is illustrated in the following diagram. 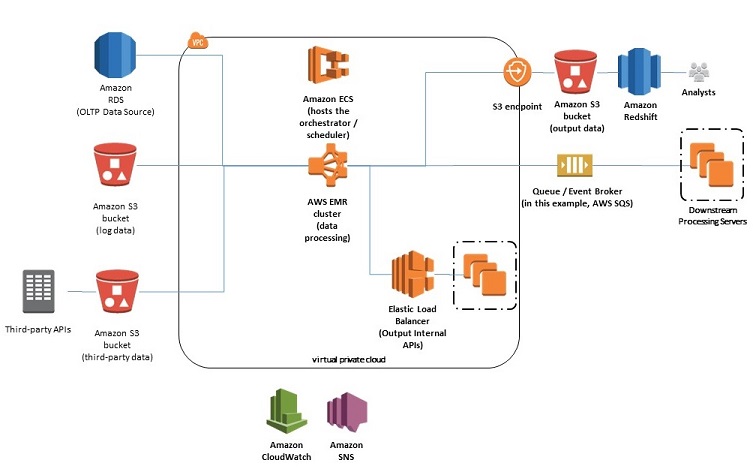 Input data sources could include

Given the amount of data to process, a distributed system is likely required, in order to complete daily processing overnight.

A commercial or open source scheduler / workflow system, such as Luigi or Pinball, provides capabilities such as

The scheduler, being a relatively lightweight, long-running process, may run alongside a number of other processes - in this example, by hosting it in a Docker container on an existing AWS ECS cluster.

The separation of the workflow manager and of the compute servers means that, after completion of the daily processing job(s), the compute cluster may be shut down to save costs. In addition, different technologies may be used for different data processing steps.
In this instance, I chose an AWS Elastic Map Reduce cluster. Such a system can be easily provisioned, manages and autoscales the underlying hardware, and integrates with cheaper Spot instances (interruptible instances).

A good choice for the distributed data processing software stack is Apache Spark, which runs off-the-shelf on AWS EMR. It is fast, due to its in-memory computing and lazy evaluation features. Furthermore, Spark is suitable for both batch processing and interactive use (via the DataBricks notebook, for example), which eases code changes and testing.

In operation, the scheduler provisions, at a predetermined time, a AWS EMR cluster (by running a shell script that calls the AWS CLI, for example). After the cluster becomes available, the scheduler submits one or more Spark jobs. Each Spark job reads data from one or more data source (e.g. from AS S3 via SparkSession.read() or via the appropriate driver), cache and process the data as required, store intermediate data, if required, in a Spark-friendly data format (e.g. Parquet), then ultimately push the final data to one or more data sinks (by calling the appropriate AWS SDK method or sending JSON to a REST API endpoint). After completion of all jobs or after irrecoverable error, the scheduler then terminates the cluster until the next day.

Networking components (not detailed for clarity) include

Detailed monitoring of the system may be achieved using AWS tools (CloudTrail to log API calls; CloudWatch to collect and track metrics, collect and monitor log files, and trigger alarms) or purchasing access to a third-party platform, such as NewRelic.

Notifications about errors and events, such as the processing end, may be relayed to the developer team via SNS (a pub sub system) or SES (an email relay).

Further redundancy and parallelism may be introduced by replicating the system across multiple regions (geographically distributed groups of datacenters).

If budget permits, the system above may be used in conjunction with a commercial ETL tool (e.g. Talend), which would additionally provide a workflow development GUI, a rich library of data processing building blocks and automatic Spark code generation, for ease of developer use.